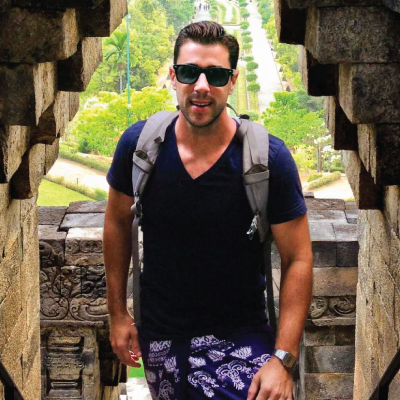 Southeast Asia’s wildlife is imperiled due to forest loss and hunting. To investigate this interdisciplinary problem, Matthew employs a range of methods including biophysical and ecological measurements, social science methods such as interviews and monitoring wildlife trade, as well as direct and indirect wildlife monitoring, such as tracking and camera traps. This work informs policies to conserve many endangered species, such as the Sumatran tiger, while balancing the needs of local people who depend on wildlife for meat, income, and cultural reasons. With the Gibbs lab, Matthew also works on documenting and understanding tropical land-use change, and employs conceptual models to reconcile agricultural expansion and tropical forest conservation.

Matthew received a BA in Economics and a BA in Geography/Environmental Studies from UCLA (manga cum laude, with honors). His undergraduate thesis revealed how native bats persisted despite extensive deforestation across the Yasawa archipelago, Fiji. After graduating, Matthew spent a year travelling through Mexico and the Middle East, before an extended stint in SE Asia. After joining Dr. Matthew Potts’ lab at UC Berkeley to begin his PhD in 2009, he has assisted Malaysia’s Forestry Research Institute doing biodiversity sampling in production logging forests near Thai-border, conducted his own field projects at Pasoh, central Peninsular Malaysia, travelled and presented research on oil palm expansion in South America and Africa (Tanzania), and led a interview-based project in Sumatra. In 2012, he helped teach a UC Berkeley course on Island Biology and Ecological Research Methods on the island of Moorea, French Polynesia. Matthew will return to Indonesia for a year of fieldwork as a Fulbright scholar late 2013-2014. Here he will undertake a camera trapping study to examine altered wildlife communities and trophic structures in three national parks that are being encroached by oil palm plantations.

Where are they Now?

Head of the Ecological Cascades Lab at the University Queensland.